This piece appeared in the Fall 2021 issue of NACLA’s quarterly print magazine, the NACLA Report. Subscribe in print today!

When the world came to a standstill in early 2020, the grinding halt animated ripples in Guyana’s burgeoning oil industry. Like other countries, Guyana closed its borders, imposed a curfew, and shuttered schools and nonessential businesses in response to the pandemic. The hinterland region, where the majority of the country’s Indigenous population resides, was particularly hard hit. While the rhythm of daily life was significantly interrupted, Guyana’s economy grew at an “extraordinary rate,” according to the World Bank, as the oil industry ramped up in its first year of production.

In 2015, ExxonMobil announced it had uncovered one of the largest reserves of oil and gas in the Western Hemisphere in the offshore Guyana-Suriname Basin, thrusting Guyana onto the map as a new petrostate. In consortium with other corporations, the fossil fuel company has since made 19 more “discoveries” in the past six years accounting for an estimated 9 billion barrels of recoverable oil and gas. With the establishment of a 6.6-million-acre claim 120 miles offshore, oil production began in late 2019. In May, the company increased its production targets, projecting it will produce 1 million barrels of crude oil per day by 2027.

These developments have only intensified U.S. interests in the scramble for the new oil frontier. The search for oil mimics a much older extractive frontier logic that birthed the modern Caribbean and drove the search for gold, the theft of Indigenous lands and territories, and the reduction of enslaved Africans to fungible property. The renewed exploration of Guyana’s coastal waters reflects a gendered and racialized colonization project that highlights how these frontier logics prey on both coastal and hinterland communities.

A lexicon of unprecedented disruption and catastrophic economic losses has, at one point or another, been deployed to describe the pandemic’s global fallout. Yet the boost in corporate profits in Guyana’s oil fields demonstrates the continuity of particular capitalist logics that spatialize death, dying, and precarity. The initial public discourses surrounding the pandemic’s impacts suggested that Covid-19 somehow neutralized, or at least leveled, racial, gendered, and class differences, presenting an opportunity to solidify economic reforms and more equitable institutions. But many critics pinpointed how this language erased ongoing structural racial, gender, and economic disparities. The notion that vulnerability—or proximity to death—had been neutralized due to a shared exposure to mortality ignored how vulnerability operates along racialized geographies of difference. That is, those rendered most vulnerable—due to structural racialized marginalization and dispossession—had to continue to make their own way in spaces of abandonment, anti-Blackness, and white supremacy.

As a United States-born Black and Indigenous (Warau/Lokono) daughter of the Guyanese diaspora, I have spent much of my intellectual, creative, and communal work interrogating how relational geographies of difference—or what I have referred to as relational difference—illuminate entrenched colonial conditions and how they intersect, animate, and propagate capitalist logics of extractivism and production. Specifically, I trace how African, Indian (South Asian), and Amerindian (Indigenous) communities have navigated the afterlives of colonial conquest, dispossession, indentureship, and slavery in the Guyanese context. Since the onset of the pandemic, academic institutions, corporations, governments, and other infrastructures have mobilized to protect capital. In the United States and Guyana alike, this response has exacerbated displacement and further burdened racialized peoples with the work of making a way amid the insistent march of capitalism and a rollback of available resources. For marginalized Indigenous communities in Guyana’s hinterland, for example, the pandemic redoubled the challenges of navigating scarce economic supports and limited access to healthcare services centralized in the coastal capital of Georgetown. 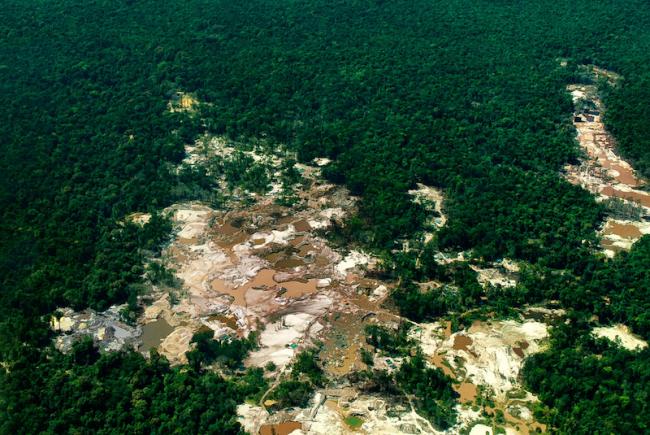 The Long Shadow of U.S. Intervention

The pandemic hit Guyana amid the reverberations of a contentious dissolution of political power. In December 2018, the government—led by President David Granger and his multiracial coalition of A Partnership for National Unity (APNU) and Alliance for Change (AFC)—lost a no-confidence vote. Fourteen months later, recent oil developments loomed large as the country held general elections on March 2, 2020. After months of fraud allegations and legal challenges, a full recount gave a victory to the People’s Progressive Party/Civic (PPP/C), which had governed Guyana from 1992 to the rise of Granger’s APNU-AFC in the 2015 election. Mohamed Irfan Ali of the PPP/C was officially sworn in as president on August 2. These episodes revealed the ongoing racialization of the major political parties. Despite the APNU-AFC coalition’s multiracial platform and promise of racial unity across difference, the party has been largely viewed as mostly Afro-Guyanese supported, while the PPP/C has been seen as predominantly Indo-Guyanese supported.

Although a preliminary recount showed a win for the PPP/C in early June 2020, chief elections officer Keith Lowenfield subsequently submitted a report that invalidated 115,000 votes and gave a one-seat parliamentary majority to APNU-AFC. International observers, members of the Caribbean Community (CARICOM), and the Caribbean Court of Justice (CCJ) swiftly rejected the report. On July 15, 2020, U.S. Secretary of State Michael Pompeo weighed in with an imperial flex, urging Guyanese leaders to accept the PPP/C opposition’s win. In a statement that mobilized the language of security, threat, and democracy, Pompeo announced visa restrictions targeting “individuals who have been responsible for, or complicit in, undermining democracy in Guyana.” He referenced “Guyana’s non-democratic trajectory” as a “dangerous” slippery slope. Finally, he reiterated: “This action is not about interference. It is to send a clear message of the consequences of subverting democracy and the rule of law, which poses a danger to us and our hemispheric partners.” Ostensibly a show of support for regional sovereignty and the CCJ’s conclusion, Pompeo’s statement demonstrates how Guyana has increasingly figured as a democratic stronghold in South America—a linchpin for ensuring security and the rule of law and order in the hemisphere—and the kinds of measures deployed to ensure a political climate amenable to the expansion of the oil industry.

As is the case across Latin America, U.S. intervention in Guyana has a long history of shaping the post-independence political landscape. Fearing the rise of a communist state under the leadership of Marxist-leaning Cheddi Jagan and the PPP, the United States intervened in British Guiana—and as of 1966, newly independent Guyana—between 1953 and 1969. Jagan won British Guiana’s first popular elections in 1953. Alarmed by his radical proposals, British colonial forces quickly suspended local rule. But Jagan returned to government in 1957 and became prime minister in 1961. Initially a multiracial party, the PPP split along political and racial lines, giving rise to the People’s National Congress (PNC) led by Forbes Burnham while the PPP became predominantly Indo-Guyanese supported. The United States, meanwhile, fomented labor unrest and race riots between 1962 and 1964. Stoking internal divisions, the United States helped provoke Jagan’s replacement in 1964 with the PNC’s Burnham, a more amenable political leader who had the backing of Afro-Guyanese and the U.S. government. Burnham would go on to lead a 20-year dictatorship.

Archival documents reveal that between 1962 and 1968, the U.S. State Department directed $2.08 million toward “covert action programs” to prevent Jagan’s reinstatement, which the John F. Kennedy administration feared would lead to a “Castrotype” communist state. Simply known as “the disturbance period,” the ethnic violence, stoked by the CIA and the U.S. union federation AFL-CIO, resulted in the deaths of nearly 200 people amid the 1964 elections, which many believed were rigged. Most of the victims were of African and Indian descent. Notably, the bodies of women, particularly South Asian women, were specifically targeted during the race riots and bore the markings of this political violence. As scholar D. Alissa Trotz has deftly illustrated, these women were perceived as reproducers of racial and ethnic difference and ascribed political affiliation—that is, targeting Indian women meant targeting the PPP.

The brief 1960s socialist period soon gave way to structural adjustment and neoliberal development—a trajectory that continued under the PPP’s return to power in 1992 in the first free and fair election since 1964. This election marked the beginning of a 23-year PPP stranglehold, including charges of state-sanctioned violence at the hands of “phantom death squads,” until the APNU-AFC’s win in 2015.

Secretary of State Pompeo’s statement invoked the long shadow of this gendered history and the continuing presence of U.S. imperialism in the Caribbean’s shifting geopolitical terrain. His expressed preoccupation with preserving “democracy” works in tandem with vested interests in neoliberal development in Guyana. Guyana’s 2016 deal with ENH—a multibillion-dollar consortium of ExxonMobil, China National Offshore Oil Company (CNOOC), and Hess—stipulates that the country would take 52 percent of oil revenue, while Exxon and its partners would take the remainder. Political parties and civil society organizations have sharply criticized and debated the terms of this uneven agreement, yet neither the APNU-AFC nor the newly elected PPP/C government have made gestures toward renegotiating the initial deal. The lopsided agreement could net close to $55 billion in forfeited revenue for Guyana, according to a 2020 report by Global Witness. (Global Witness unpublished the report in January 2021 citing internal inconsistency with its “organisational strategy” of documenting the drivers of climate change. It noted, however, that this was “not an endorsement of the way Exxon or Guyanese officials negotiated the oil licences.”)

In stark contrast to local politicians’ promises that oil will translate into wealth for all Guyanese, the economic consequences of the deal would prevent Guyana from making healthy contributions to its Sovereign Wealth Fund, a national reserve for future development projects created as part of the oil deal. Falling oil prices and the pandemic-induced economic slump, which is unlikely to shift in the next five years, compound these dynamics. One key stipulation of the agreement made Guyana responsible for reimbursing the companies for extraction expenses, including the costs of drilling, transportation, and shipping. A 2020 report from the Institute for Energy, Economics and Financial Analysis (IEEFA) projected that by the end of 2025, Guyana will owe ExxonMobil and its partners $20 billion.

Read the rest of this article here, available open access for a limited time. View the full table of contents of the Fall 2021 NACLA Report here.

Shanya Cordis is assistant professor of Sociocultural Anthropology in the Department of Sociology & Anthropology at Spelman College. Her forthcoming ethnography is tentatively titled Unsettling Geographies: Antiblackness, Gendered Violence, and Indigenous Dispossession in Guyana. Special thanks to Heather Gies and Christopher Loperena for their insightful comments.